The first quarter sales market in the Financial District fared extremely well overall. Consistent increases in both average and median price show that the neighborhood is continuing to make headway as a destination neighborhood. With almost a 50% drop in closings compared to last year, more people are signing contracts with longer closing periods at some of Financial District’s new developments. As these developments start closings in late 2015 and 2016, we should see a dramatic shift in both price and volume sold. Some highlights are below:

• Average price up over 18% year over year

• Average price of 1 bedrooms increased over 13% since last quarter

• The average discount off asking decreased further to 2.38% from last quarter 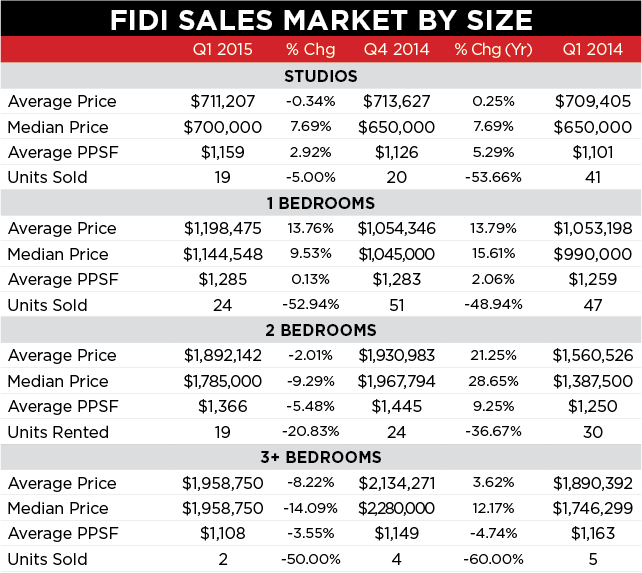 The rental market stayed fairly on track with what seasonality has traditionally dictated. The average rent stayed consistent at around $3,750 per month across all unit sizes. As the spring starts and the rental market activity picks up, we should see this price be driven up slightly by demand. Also, with the opening of the 1 World Trade Center and companies moving into their spaces, we saw a less significant decrease in the seasonal prices than we typically have. We also saw a decline in the total inventory year over year. The spring and summertime should see a new wave of inventory hit the market as the highly anticipated 70 Pine Street and second phase of 20 Exchange Place hit the market. Some highlights below:

• Both inventory and the units rented declined year over year

• Studios were the highest price increase with 3.61% increased since last year 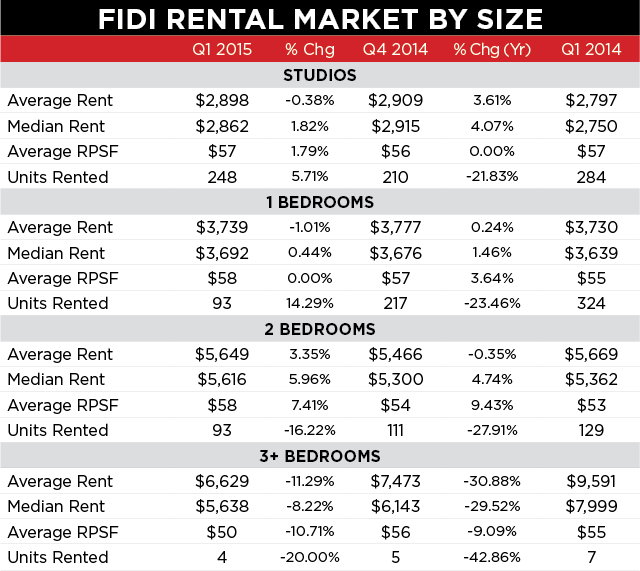 The FiDi Report, which is prepared by Platinum Properties’ President, Daniel Hedaya, focuses on real estate activities in New York City’s Financial District, encompassing the area bounded by the West Side Highway, the FDR Drive, Chambers Street and Battery Park. All data is based upon a combination of Platinum’s internal database, open rental listings, exclusive brokerage listings as well as city records. Some pricing discrepancies may appear due to the number of bathrooms, balconies or additional amenities. All prices reflect average values.