Thinking about an apartment in Midtown East? Platinum Properties will tell you all about the history and current happenings in the area so you can make the most informed decision about where to call home.

Ever wonder how the Turtle Bay area of Midtown East got its name?

Located in the heart of Midtown East is the neighborhood of Turtle Bay, spanning the radius from 42nd to 53rd streets and Lexington Avenue to the waters of the East River, with views of Roosevelt Island. This historic enclave got its name when the Dutch governor, in 1639, bequeathed this piece of land to English settlers. Originally called “Turtle Bay Farm,” some speculate this was due to the large population of turtles residing in the creek that once wound its way through the area.

Though the turtles are long gone, Turtle Bay is still alive and growing now more than ever. The neighborhood represents both the importance of looking back and looking forward in this city: the iconic Chrysler building, an Art Deco style skyscraper completed in 1930, stands tall in the southwest corner of the region as a vigilant and permanent fixture of the Manhattan skyline, while the United Nations Headquarters in the most southeastern point of Turtle Bay represents the ever-changing future of our country and world. The quaint, classic townhouses of the idyllic and elegant Sutton Place and Turtle Bay Gardens Historic District are only steps away from glass-walled condominiums and high-rises. It’s not uncommon to spot a diplomatic license plate as you walk down the street or a colorful national flag waving above a row house, indicating the presence of a foreign country’s leader. Turtle Bay, as a central point of not just Manhattan but also the world, is reflective of New York City’s prominence and well-respected reputation. 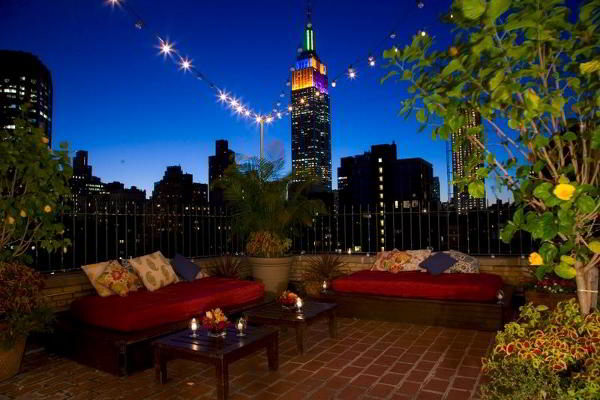 Bordered to the west by the hustle and bustle of Times Square, the north by the luxurious shopping of the Upper East Side, the south by the lively nightlife of Murray Hill, and the east by spectacular views of the East River, Midtown East is no stranger to the New York lifestyle. Explore some of the city’s greatest dining at spots like The Smith, where classic American fare is reinvented, and Hillstone, one of the top-rated restaurants in Manhattan. Enjoy martinis and wine with your colleagues under the light of the Chrysler Building at Upstairs at the Kimberly, or grab a more casual drink with friends on the rooftop of Midtown 1015.

The dinner scene and nightlife aren’t the only attractions in the heart of Midtown East. Its proximity to the East River exposes the neighborhood to some of the best nature oases in the city. Take the scenic aerial tramway to Roosevelt Island, where you can have a family picnic by the lighthouse or explore the different art installations, exhibitions, and festivals put on by the Roosevelt Island Visual Art Association. Feel like staying a little bit closer to home? Take a walk beside the river at the quiet, well-kept Peter Detmold Park or bring a book and sit beside the waterfall at Greenacre Park. Whether its day or night, there is always something to do in Midtown East.

To learn more about Turtle Bay, Midtown East, or any other area of New York, visit our neighborhood pages or contact a Platinum agent.

How to Win A Bidding War in New York City

How These Agents Pivoted to Real Estate During the 'Great Resignation'