You can’t scroll through your social media feeds or watch your favorite television program or even get through an entire Uber ride without mention of the upcoming Presidential election. This is likely one of the most discussed elections in our lifetime, which means its tough for it not to be top-of-mind for, well, almost everyone. As we creep closer to the election most of us are wondering how our nation will change with either Trump or Clinton in the hot seat. You might even be wondering what this will mean for the, currently growing, real estate industry. Will growth continue? How will the decisions of our new president effect the value of your rental property or the potential resale of your single-family home?

Generally the housing market has experienced steady growth since the country’s housing crash and subsequent economic recession in 2008. The economy is doing okay although GDP has increased by less than 15 percent from the start of the recovery in 2010, which makes this recovery one of the weakest in history. Furthermore, the real estate recovery has taken time as financial requirements for home purchasing have tightened and many people either lost their savings or have struggled to build a nest egg immediately following the recession. While things have started to pick up, it’s important for homebuyers, owners and sellers to understand how changes in office might disrupt the U.S. real estate market.

Peter Linneman, Chief Economist of NAI Global, believes Donald Trump’s involvement in the real estate business will trigger an overexposure of tax regulations’ impact on real estate in the next few months. Thought it’s uncertain what the tax implications will be with Trump as president, there wouldn’t be much of an impact until 2018 as 2017 would be the year that new policies would be just introduced and implemented. Linneman believes that as opposed to Obama, both Clinton and Trump are big believers in the markets, which will be good for our economy and ultimately real estate growth.

According to a Zillow survey of real estate experts, the majority of professionals believe that a Clinton win would result in high home values and housing finance reform with a neutral effect on the overall economy. These same experts believe a Trump win would have a negative effect on home prices as economists would lower their expectations for home values and overall performance of the economy. Economists also believe that global issues like Brexit will have even more of an impact on U.S. housing markets and the global economy than our own elections at home.

Aside from how particular candidates would alter the housing market, an election year generally means lower house prices. These conditions have been looked upon favorably by investors who anticipate a slight rise in market prices once the president has been able to settle into office. According to a movoto.com study of the California real estate market, house prices typically rise 1.5% less during an election year than the year prior to the election, and then 0.8% less the year after an election year. This decline in home prices is also typically more significant the closer the race, as this means increased uncertainty. For you investors looking to buy… open those checkbooks before November.

Ultimately, consumers tend to be a little apprehensive when it comes to making large purchasing decisions during an uncertain election year. While this may be less comforting for people putting their homes on the market, this is great news for homebuyers or real estate investors. Home prices should dip this year and slightly less next year, with a steady rise after that. So if you’re looking to make an investment or purchase a home that you will be in until at least 2018, this is the time to buy.

So while you’re friends are digging up Trump radio interviews or tweeting about leaked e-mails… make that property investment you’ve been dreaming of and you should have a giggle all the way to the bank come 2018. And depending on if your candidate of choice wins or loses, you can use that extra income to buy yourself a nice little place in rural Canada. 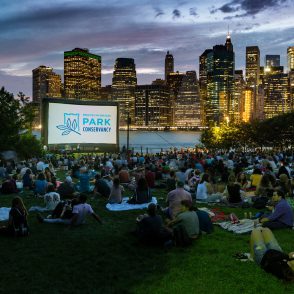 The Best Spots for Outdoor Movies in NYC