Paying top dollar for small living spaces has been something of a fact of life when it comes to living in New York City. We New Yorkers complain about it, joke about it, and get on with it, because many of us are happy to settle for a small space to call home – but things are changing.

Lockdowns, social distancing, and the rise of working remotely have made us rethink our approach to living space. Whether you’re looking for a Tribeca apartment or one in Brooklyn, the West Village, or another neighborhood, there’s a good chance that getting more space for your money is an important consideration. Let’s take a look at a few price-per-square-foot comparisons in NYC.

Looking at the price per square foot (PPSF) over the last year or so, we’ve found that Brooklyn offers more space for your money. According to StreetEasy, the PPSF for certain types of apartments in Brooklyn is dropping in the borough. In January, the median asking PPSF was $666, which was 3.8% lower than the median asking price in the same month last year.

It’s important to note that the overall median asking price for a home remained $899,900 since last year. The drop in PPSF is a result of larger homes being listed at lower prices. We must add that those lower prices aren’t a result of a lack of interest in the borough.

Apartments in Brooklyn still are incredibly popular, and the 658 contracts signed for homes there in January are proof of this – especially since that number is 5.6% higher than the number of contracts signed in the same month last year. The borough is particularly popular among buyers who don’t want to pay much higher prices for spacious Upper East Side apartments and homes in other Manhattan neighborhoods.

If you’re looking for a Tribeca apartment or a home in another Manhattan neighborhood, you may need to be prepared to pay more for more space. Manhattan is where you’ll find the five neighborhoods with the highest PPSF in the city – and prices in those areas continue to rise.

January’s median asking PPSF was $1,612, which was 11.1% higher than the median in the same month last year. The annual increase was the largest since 2015.

The steep increase in the PPSF in the borough was a result of a thriving luxury housing market, which saw the cost for the top quintile leap by 15.5% to $2,274 in January. That said, the PPSF for the borough’s most affordable homes fell by 6.8% to $714 in the same month. This means the real estate market in the borough offers a wide range of sizes and prices.

In January, the median asking price for a home in Manhattan was $1.5 million, which was a 13.2% increase from January’s median asking price from the prior year. However, the borough saw the number of contracts signed decrease for the second month in a row. Only 1,031 contracts were signed that month, compared to April 2021’s peak of 1,642 signed contracts.

Taking a closer look at specific Manhattan neighborhoods, we found that the median asking price for Tribeca apartments in January was $4,495,000, which was a 3.90% increase on the median asking price in the same month last year. The West Village’s median asking PPSF of $2,260 was a 6% increase from last year’s January median. The neighborhood offers the least space for your money, which is something to consider if you’re looking for West Village apartments for rent.

Turning our attention to Upper East Side apartments, we found that the neighborhood’s $1,675,000 median asking price was an 11.70% increase year over year.

Finding spacious Tribeca apartments and homes in other NYC neighborhoods that offer you more living space can be a challenge, but the Platinum Properties team is here to help. Contact us today. 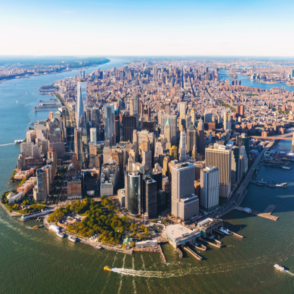