No other city changes as quickly as New York City. It’s easy to feel behind on the latest trends, restaurants and hotspots.

As Manhattan luxury apartment specialists, we’re happy to provide you a bit of foresight into NYC’s most up and coming neighborhoods.

Just south of the East Village, the Lower East Side used to be an immigrant/working-class neighborhood in the 80’s and 90’s.

Beginning in the early 2000’s, the LES started developing with lots of trendy restaurants and bar life.

The once vacant parking lot on Delancey Street will become The Essex Complex Crossing in early 2020.

It will include luxury apartments, new restaurants, and shopping.

Prior to the rezoning in 2005, Hudson Yards was solely a train yard for extra trains running into Penn Station.

In 2005, New York City rezoned the area to prepare for residential and commercial development starting in early 2010.

The Hudson Yards redevelopment project will produce its first 895-foot tall building as early as 2015.

Other new developments include extending the 7 subway line to 11th avenue as well as a new school. 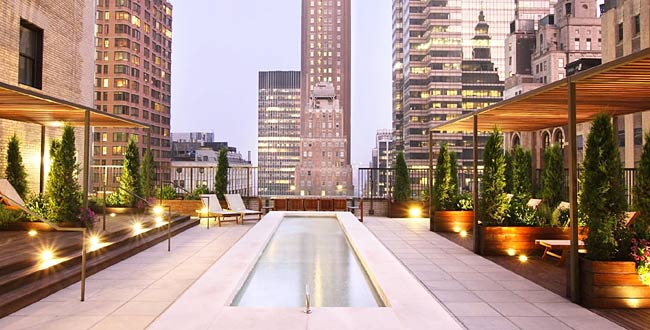 The well-known Financial District has always been home to the city’s finest businesses.

In the early 2000’s, the residential rate jumped nearly 300% after the neighborhood started converting old office buildings into luxury apartments. FiDi residences have arguably the best rooftops in Manhattan (rooftop at 20 Pine Street photographed above).

FiDi is set to become the host to two 50+ level condo/hotel buildings in the next few years.

Also for those foodies out there, The Howard Hughes Corporation is developing a 40,000 square foot world-class food market on the West Side Seaport.

In the past 50 years, Washington Heights has hosted many different kinds of immigrants looking to start a new life in the city.

In the early 2000’s, urban development began by introducing the neighborhood to restaurants and bars of all different ethnicities.

It’s important to factor in more than just cost when searching for your ideal Manhattan apartment.

Factors like space, proximity to work and transportation, how loud a neighborhood is and more are all incredibly important!