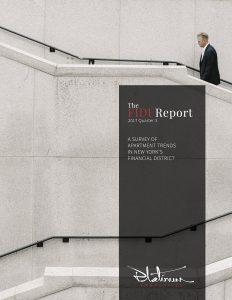 -The median price discount decreased from the previous quarter from 1.91% down to -3.45%.

– The largest drop in ppsf to $1,609 was among three bedrooms where there were more resales and fewer new development sales than in previous quarters.

The rental market in the third quarter showed a sharp drop in total inventory. This, along with almost static pricing QoQ, suggests that the rental market may be stabilizing, at least temporarily, after months of price drops and added concessions. Year over year, there was a moderate average price increase of 5.63%. Three bedroom apartments, which represent 3.5% of FiDi apartments rented in Q4, went against the overall trend with 180% increase in units rented from 5 to 14, and 40.77% average price increase from $11,968 to $16,847.

-Studios and One bedroom rentals accounted for 82% of all apartments rented in Q4 2017.

-Median rent actually increased both QoQ and YoY to $4,269, slightly lower than the average rent of $4,305. This does not factor in landlord concessions which currently affect roughly 30% of the market. 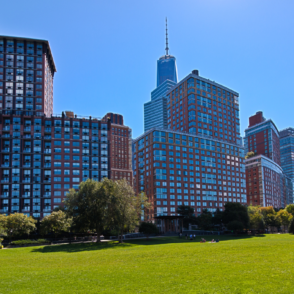