Did you know the World’s Best Bar is located right here in the Financial District? And soon the popular establishment will double in size.

The owners of The Dead Rabbit, located at 30 Water Street, recently signed a 17-year lease on the adjacent property and will begin work immediately to connect the two buildings over two floors. The new space is expected to reach approximately 5,500 square feet.

Jack McGarry and Sean Muldoon, co-founders and owners of The Dead Rabbit, opened the bar in 2013 after six years of planning. It’s one of the busiest bars in Manhattan, and for good reason. They took the idea of a traditional Irish pub and paired it with outstanding craft beer, specialty cocktails and fantastic food including a legendary prime rib. The bar is designed as a mid-19th century-style drinking saloon, and takes its name from a street gang well known when the landmark building was constructed in the 1820s. 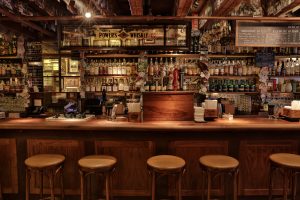 The bar features three floors, each with a different vibe. The Taproom on the first floor serves up craft beer, bottled punches and whiskey, with live traditional Irish music every night and a DJ three nights a week. The Parlor on the second floor is the “cocktail cathedral” with an eclectic menu of original cocktails, ragtime piano on Wednesdays, and an oyster happy hour every weeknight. The Occasional on the third floor can be reserved for private events.

Lots of bars may call themselves “world’s best” – but The Dead Rabbit actually is. Here’s a rundown of their recent accolades:

New projects on the horizon

In addition to the expansion happening at The Dead Rabbit, the owners have several other projects in the works. In the spring they’ll be launching a book called Mixology & Mayhem, followed by From Barley to Blarney, an Irish Whiskey Lovers Guide to Ireland in 2019. More comic books in their menu series are slated for release this year. In addition, an outdoor bar at Pier A called The Black Tail will open in 2018.

If you’d like more information about buying or selling real estate in FiDi, please click here to contact Platinum Properties, or call 646-681-5272. We are available anytime to answer your questions.