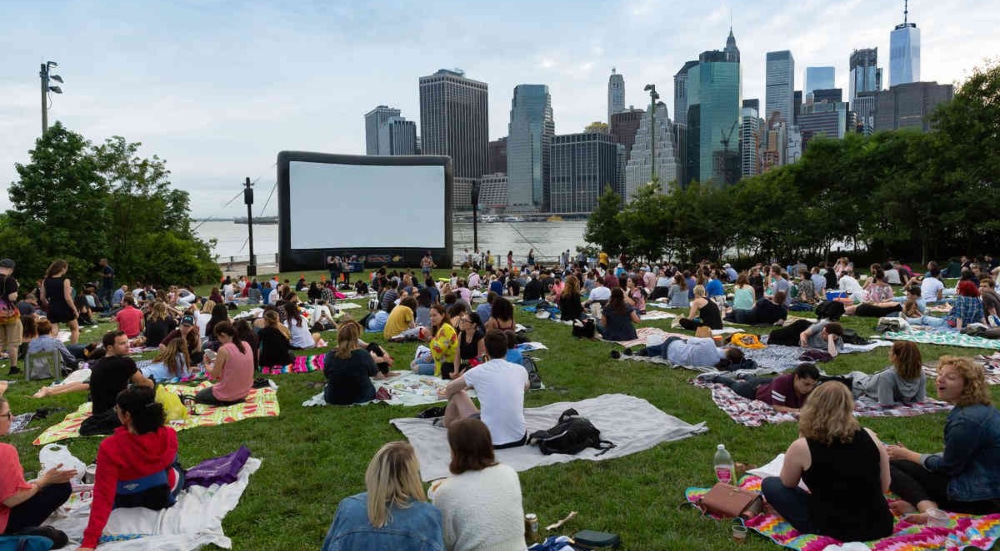 With rising temperatures and every New York City park in full bloom, what could be better than a night out at the movies under the stars? We’ve compiled a list of our recommendations for the best locations from Manhattan to Queens to catch your favorite flicks and enjoy the summer air. Don’t forget a blanket!

Celebrating its 20th anniversary this year, Movies with a View at Brooklyn Bridge Park is the perfect spot to take in entertainment and the twinkling lights of the skyline. Movies are screened every Thursday until August 29th (and we’re excited to say Smorgasburg will be back providing food and drinks).

Right in the center of Manhattan, Bryant Park Movie Nights draws crowds from far and wide to take in some film (so be sure to arrive early to catch a spot in the grass). The season began this week with a screening of Big and will continue to run every Monday night through August 12th.

Spanning two different piers in Chelsea and Greenwich Village, Hudson RiverFlicks is great for both adults and kids alike. Festivities will kick off at Pier 63 on Wednesdays beginning July 10th, even featuring the music of Shaolin Jazz for screenings of The Warriors and The Last Dragon on select days. Looking for something a little more child-friendly? Just down the West Side Highway beginning July 12th, Family Fridays features a host of your favorite animated films like Ralph Breaks the Internet and Incredibles 2.

NYC Parks and the Museum of Chinese in America (MOCA) have partnered to host four film screenings in Columbus Park on Fridays during the month of June. Luckily there are three nights left – Kung Fu Panda has already come and gone, but you still have a chance to get to see The Joy Luck Club, Crazy Rich Asians, or The Professor: Tai Chi’s Journey West.

Now in its seventh year, Bronx Terminal Market is another family-friendly outdoor movie option which runs a showing on its roof once a month. This year’s picks to catch are Spider-Man: Into the Spider-Verse on June 11th, How to Train Your Dragon: The Hidden World on July 9th, and Incredibles 2 on August 13th.

Looking for a movie in Spanish? How about French? Returning on July 3rd until August 21st, the outdoor film series at Socrates Sculpture Park will showcase foreign-language independent films (but don’t worry, subtitles are included). Enjoy, or as they say in Italian, “Divertiti!”

As you’re traveling across the city to catch these movies, you’ll have the opportunity to take in all the different types of available real estate in each neighborhood. Click here or call 646.681.5272 to speak with an agent from Platinum Properties if you have any questions along the way! We’re standing by to help you through every step of the real estate process, whether you’re buying, selling, or renting.